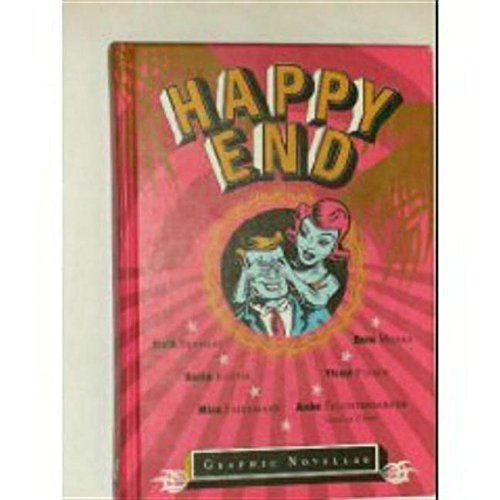 The blurb on the back cover of this Israeli comics collective's latest book states that each of the graphic novellas within has a "happy ending, for a change." But this disclaimer turns out to be rather tongue-in-cheek, as the most these artists can manage for their readers is an emotionally vague, backhanded ray of hope. This volume includes separate works by each of the five Actus members, along with a muted, nightmarish story about a girl's passage into the netherworld by guest artist Anke Feuchtenberger. In Mira Friedmann's "Skin Deep," a lonely young woman wakes up after a drunken birthday to find she has a huge tattoo of a handsome man's face on her abdomen and an inexplicable emotional dependence on it. In Rutu Modan's "The Homecoming," an Israeli father is convinced his long-lost son is back from the dead when a plane begins circling their kibbutz—until the plane is shot down as a terrorist threat, rendering the pilot unidentifiable but keeping the family's hopes alive. And in Yirmi Pinkus's "Entertaining Gerda," a disillusioned married couple copes with mutual boredom by indulging an amoral, superficial lifestyle for the sake of impressing a spying neighbor and in the process finds some measure of mutual interest and happiness. Actus's art is beautiful and the narratives evoke the complex mix of isolation, humor and quiet unease these artists have become known for. But the stories in this collection don't resonate as strongly as their previous works, and the happy-ending motif doesn't quite achieve the depth of past Actus projects.