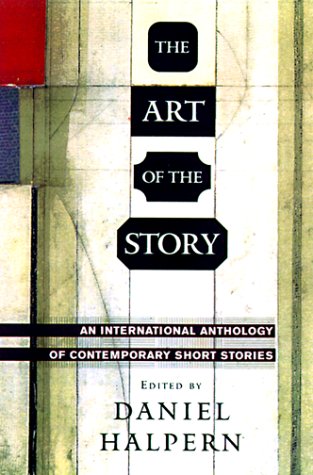 The Art of the Story: Short Stories by Contemporary International Writers

A decade after Halpern's Art of the Tale anthology comes a hefty companion volume, this one collecting 78 international, contemporary authors, those born between 1938 and 1970. The new book elegantly shrugs off the dictates of political and cultural theorists to answer the demands of literary aesthetics. Yet the stories represented here, written by authors from 35 countries, are rife with honest social commentary: Haruki Murakami's suburban fantasy ""The Elephant Vanishes"" is told by a bourgeois Japanese man living outside Tokyo; the characters in Bobbie Ann Mason's ""Wish"" are poor tobacco farmers with crocheted pillows, sour stomachs and dirt yards; ""Escort"" by Abdulrazak Gurnah tells of a Tanzanian who returns briefly from England, where he is a teacher and a scholar of poetry, and becomes unwillingly involved with his taxi driver, a meticulously evil lapsed Muslim named Salim. The philosophy guiding Halpern's choices, as he points out in a refreshingly brief introduction, is that contemporary authors, unlike the early moderns collected in his previous anthology, are essentially reactionary: they respond conservatively, critically and satirically to the effluvia of current popular media. Though claiming to be an international selection, the majority of these stories were written in English, and many are by the usual suspects for such a collection: Lorrie Moore, Joyce Carol Oates, Julian Barnes, Martin Amis, T.C. Boyle, Raymond Carver. The international scene is represented by well-known writers-in-translation like Banana Yoshimoto, Patrick Chamoiseau and Peter Esterhazy, along with some distinguished voices not yet discovered by mainstream American readers. Halpern selected these stories with great intelligence and zero trendiness, and the anthology is a true pleasure at every turn. (Nov.)
close
Details