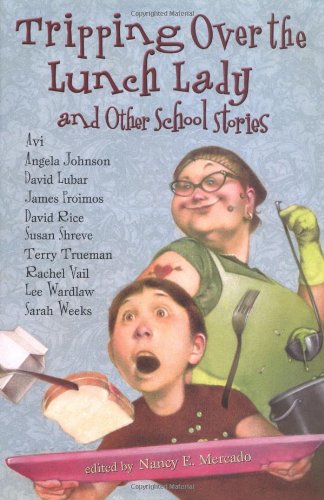 TRIPPING OVER THE LUNCH LADY: And Other School Stories

Students will likely see themselves in these 10 appetizing stories about the ups and many downs of school life. The fifth-grade heroine of Angela Johnson's title story is an endearing klutz of epic proportions (she has broken the gym teacher's nose). Avi's narrator misspells his way through an account of how his English teacher foiled a robbery and fell in love with an erudite thief. Three stories touch on the horrors of being saddled with a bad name, including Sarah Weeks's "Experts, Incorporated," in which the hero's name—Rodney Curtain—is fine until roll is called alphabetically ("Curtain, Rod"). Terry Trueman's tale of a class clown, forced to read aloud a serious poem about war, evokes the sweaty anxiety of waiting to be called on ("The war poems have taught us that it's not a very good idea to 'volunteer,' " the narrator says). Humor leavens the weightier issues (reading trouble, social awkwardness, unrequited love) and a few jokes will elicit groans (asked to define "random" in science class, a character in "Science Friction" explains, "There were two squirrels in my driveway, but then my dad random over"). Unfolding in comic book–style panels, James Proimos's droll story, depicting a day-in-the-life of a bungling wiseacre is hilarious. Brief biographical information at the end of each tale reveals that almost every writer's least favorite subject was math. Unlike school cafeteria fare, this inviting buffet has something for everyone. Ages 10-up.