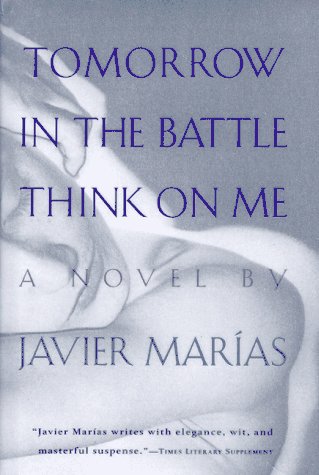 Tomorrow in the Battle Think on Me

This novel, widely admired in Europe, has won major Spanish and French literary prizes--which indicates the odd differences between European and American tastes. For the book, despite its original idea, its flashes of antic humor and its mournful awareness of mortality, strikes an American reader as rather forced and drawn-out. Its protagonist, Victor, is a moderately dissolute scriptwriter in contemporary Madrid who is faced with an unusual dilemma. During a tryst in her apartment with Marta, a married woman (her husband Eduardo is out of the country on business, her small son asleep in the next room), she suddenly falls deathly ill and dies in his arms. What should he do? Let the husband know? But how? What about her family? What will happen to the child? Victor improvises his own solutions to the various problems but finds himself mysteriously drawn into Marta's grieving family: he writes a speech for her father, an aging courtier (sly fun here at the expense of the sclerotic Spanish court); he thinks of starting an affair with Marta's sister Luisa; he waits anxiously to know what Eduardo will do when he finds out who the mystery man at Marta's deathbed was. Victor also picks up on the street a woman who may (or may not) be a former wife and, throughout, indulges in soliloquies about the sad transience of human affections. Sometimes he strikes a note of genuine pathos, but just as often his musings, with their repetitions and long, long run-on sentences, become tiresome. (The quote from Shakespeare's Richard III that serves as his title keeps recurring in different contexts.) Eduardo, when they finally meet, has a strange story of his own to tell, and it makes for the most energetic, sustained passage in the book. But the main impression Marias's novel leaves is of an author trying to impose a philosophic pattern on material that resists it. (Sept.) FYI: Marias recently won the IMPAC Dublin literary award, worth 100,000, for his novel A Heart So White.
close
Details