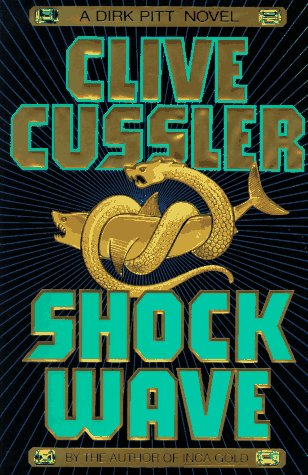 Dirk Pitt (Inca Gold), eco-warrior of the National Underwater & Marine Agency (NUMA), returns for another boys' adventure tale, this one set in the year 2000. Along for the sail are Pitt's roly-poly sidekick, Al Giordino, and father-figure Admiral Sandecker, head of NUMA. As with all of Cussler's novels since he raised the Titanic 20 years ago, the plot is a pip. People and animals are dying mysteriously and in droves on various ocean shores, a catastrophe caused by high-frequency sound waves generated by the ruthless diamond-mining techniques of Australian tycoon Arthur Dorsett, whose fiendish plan is to ruin the diamond cartel and corner the colored gem market. Sometime after Pitt gets on the case, he winds up being cast adrift by Dorsett in a small, leaky boat in the Pacific; also on board are steadfast Al and Dorsett's rebel daughter, Maeve, who provides the novel's love interest. The three are shipwrecked but survive to build a small craft that will take them to Dorsett's island fortress, where they hope to rescue Maeve's twin sons, hostages of the unlikely villain (Dorsett suffocates one enemy by stuffing his mouth with diamonds). Meanwhile, Admiral Sandecker realizes that the deadly sound from Dorsett's four Pacific mines will soon converge in Honolulu, killing everyone there. That Cussler's American characters measure and weigh things in metric terms isn't nearly as aggravating as the author's prose, which is not just wooden but petrified. Still, John Gardner notwithstanding, in spirit if not style the Pitt series is the closest thing going to that highwater mark of cartoonish derring-do, Ian Fleming's James Bond novels, and the rollicking rough-and-tumble here should satisfy most action fans just fine. 750,000 first printing; Literary Guild and Doubleday Book Club main selection. (Jan.)
close
Details