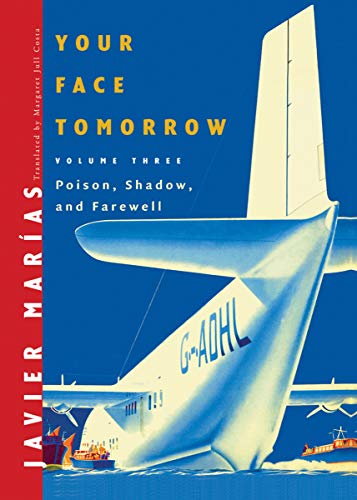 Marias concludes his enormously praised and disquieting trilogy with the last increment of Jacques Deza's story, finding him recruited as a character analyst by a shady British intelligence agency. He's working for Bertram Tupra, who welcomes Jacques into the intelligence fold by using him in his plot to assault a Spanish embassy employee. Soon, Tupra shows him horrifying blackmail videos gathered by the agency that “poison” Jacques's soul. The effect of this poison becomes apparent when Deza returns to Madrid to see his father and his estranged wife, Luisa, who sports a black eye presumably inflicted by her boyfriend, Estaban Custardoy. Jacques begins to secretly track down Custardoy with the intent of persuading him never to see Luisa again, and when Jacques finally confronts Custardoy, Marias's masterful depiction of the ecstasy of violence makes it difficult not to exult in Jacques's barbarous behavior. The intrigue yet to come pushes Jacques into a crisis of conscience. Costa does a flawless job of translating the strange mixture of high cultural references and Jacques's essentially thrillerlike story line, making for a reading experience like no other.