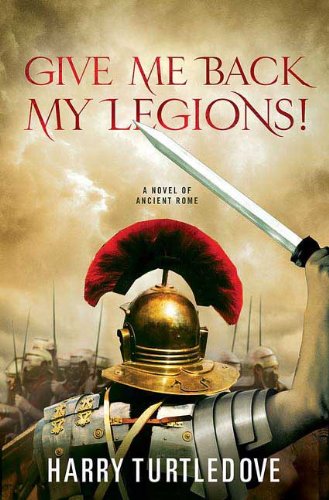 Give Me Back My Legions!

Alternate history icon Turtledove probes the intrigues and battles surrounding Roman Emperor Augustus Caesar's attempts to control uprisings in Germanic lands circa A.D. 9. Caesar appoints Publius Quinctilius Varus, formerly a successful governor of Syria, to become the new governor of Germany, and Varus sets off bolstered by three legions from the overextended Roman army. Sure that he is headed for further glory, Varus is unaware that crafty Prince Armenius, who serves in the Roman army but secretly seethes in indignation at Rome's plans to make Germany another conquered territory, is planning a massive revolt. Turtledove rotates through many points-of-view, from Caesar to slaves and soldiers, to give a panoramic look at the epic battle of Teutoburg Forest, laced with telling details of ancient military life and strategy and lightened with humorous interludes. The fantastic action scenes and taut narrative make this a fine addition to the ancient Roman battles canon.