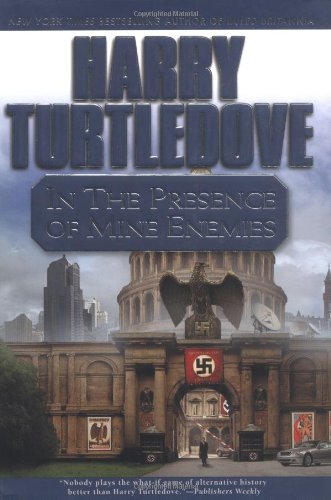 IN THE PRESENCE OF MINE ENEMIES

Despite its intriguing alternative premise, Turtledove's lengthy tale of Berlin's Jews hiding in the open long after the Nazis defeated all their WWII enemies plods along in a series of vignettes told from the viewpoints of six different Jewish characters passing as "good Germans": Wehrmacht analyst Heinrich Gimpel, his wife, Lise, and their precocious 10-year-old daughter, Alicia; medieval English scholar Susanna Weiss; and physician's receptionist Esther Stutzman and her husband, Walther, whose computer expertise has helped many Berlin Jews shed their "unclean" ancestry. But as the Gimpels and their friends struggle to keep their secret culture alive, all around them chinks are appearing in the very foundations of the Reich, starting with the death of Hitler's second successor and the selection of a progressive new Führer. Tepid characterizations, clumsy plot devices, interminable bridge sessions between the Gimpels and their Aryan friends, even some dialogue seemingly better suited to a drawling John Wayne than a Wehrmacht panzer commander (who defies the SS with "you're going to be mighty sorry"), all dilute the author's message of hope for these downtrodden remnants of the Chosen People. Closing on a curiously inconclusive note—or is it a lead-in to an equally ponderous sequel?—this account of an unlikely political thaw dribbles off into a puddle of clichés, sentiment and unconvincing coincidence.