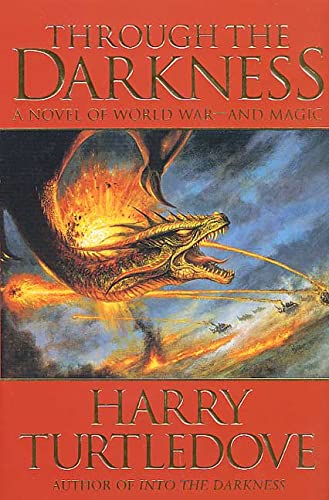 Harry Turtledove, Author THROUGH THE DARKN

The third chapter in Turtledove's acclaimed alternate history–fantasy series (after and ) expands on its WWII framework, providing a vivid portrait of a land torn by the horrors of out-of-control political ambition and magical warfare. Aggressor nation Algarve continues to batter its rivals with magical beams powered by the bloody deaths of thousands of innocent Kaunians. In the meantime, Algarvian ally Zuwayza has offered asylum to those Kaunians who can reach its borders, stirring up old antagonism between Algarve and Zuwayza. Sorcerous scholars in Kuusamo, loosely allied with Algarvian enemies Lagaos and Unkerlant, focus on the potentials of a bloodless—but no less deadly—form of magic that could be the deciding factor in defeating their enemy. As armies on foot, dragon, behemoth and leviathan collide, Turtledove shows the effects of the ongoing struggle on a cross section of societies, from Kaunian refugees to nobles powerless to say no to alliances with mighty Algarve. Turtledove's clever series impresses with its sheer scope and intricacy. Here he juggles a cast of more than 130 characters, which means readers new to the saga will have to work hard to get their bearings in the first 100 pages or so. Although the pace is slow and myriad details demand constant attention, Turtledove's devoted fans will cheerfully muddle through, as will fans of military fantasy based on solid historical fact.