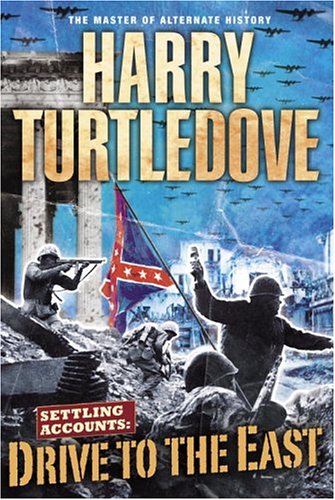 Settling Accounts: Drive to the East

In Turtledove's engrossing second book in the alternate history master's Settling Accounts trilogy (after 2004's ), Confederate forces, in an undeclared war of revenge that coincides with WWII, have split the United States from the Ohio River to Lake Erie, but this only stiffens Yankee resolve. Insurrection breaks out in occupied Canada and in Mormon Utah, resulting in harsh reprisals by U.S. troops against civilians, while Confederate President Jake Featherstone pushes for more "population reductions" of freed slaves. As in the previous volume, Turtledove comes up with convincing analogues to events during WWII, such as the Confederate army's Stalingrad-like defeat around Pittsburgh. On the other hand, his portrait of the führer-like Featherstone is less persuasive. The Southern leader shows more courage and flexibility than his model, making intimations of future behavior a procrustean attempt to force him back into a Hitlerian mold. There's enough back story for the benefit of new readers, while established fans, despite the repetition, will find this latest installment thoroughly satisfying.