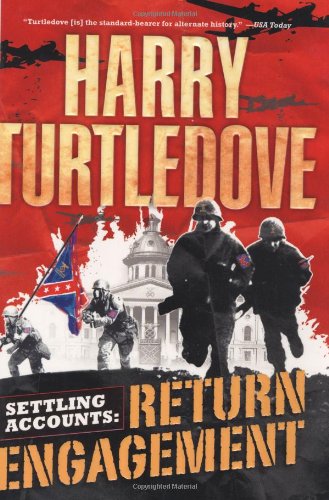 In this well-thought-out alternate history, the first in a new trilogy, Turtledove ( ) combines elements of the Civil War and WWII with disturbing results. Confederate President Jake Featherstone has launched an undeclared war of revenge on the U.S.A., with Rebel "barrels" (tanks) cutting the nation in half. U.S. President Al Smith doesn't sue for peace as expected, causing unreconstructed Canadians to sabotage the now-vital Northern rail system holding the nation together. Mormon separatists have once more revolted against the federal government, and Louis Armstrong, who has defected to the North, brings with him chilling evidence of the Confederate "population reductions" (genocide) of African-Americans. Turtledove's depiction of how easily the C.S.A. could carry out genocide—and do so with less cost to the conscience than the Germans experienced in the real Holocaust—coupled with the "so what?" reaction of Northerners when this is publicized makes a disturbing commentary on the state of race relations in both parts of our country. While some of the character descriptions are repetitious, the author handles his huge cast with admirable skill. The insights into racial politics elevate this novel to a status above mere entertainment, although it provides that aplenty.