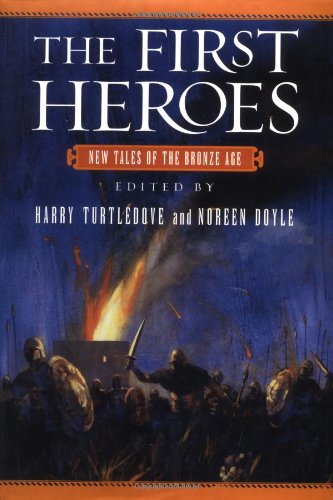 THE FIRST HEROES: New Tales of the Bronze Age

The 14 all-original historical fantasy stories compiled here by Turtledove and Doyle all confirm the opinion voiced by one character that "History isn't melodrama. It's tragedy." Although set in the same era that gave rise to the epic of Gilgamesh, the Aeneid and the Iliad, most have an elegiac tone appropriate for tales about heroes aware of the transience of glory and about ordinary mortals struggling to understand the whims of the gods. In Karen Jordan Allen's "Orqo Afloat on the Wilkamayu," a sympathetic protagonist wrestles with his inescapable fate to die an ignominious death and thereby help preserve his race. Harry Turtledove's stunning "The Horse of Bronze" is a poignant tale of first contact between humans and centaurs who, upon seeing men for the first time, become self-conscious of their species' deficiencies. Several of the most powerful stories are straight historicals that suggest the fantastic only indirectly, notably Judith Tarr's "The God of Chariots" and the late Poul Anderson's "The Bog Sword," which uses a wisp of speculative science to send its narrator back to the twilight of the Bronze Age when the world as his family tribe knows it comes to an end. Readers will find some of these stories mere historical curiosities, but others amount to beautiful and durable artifacts.