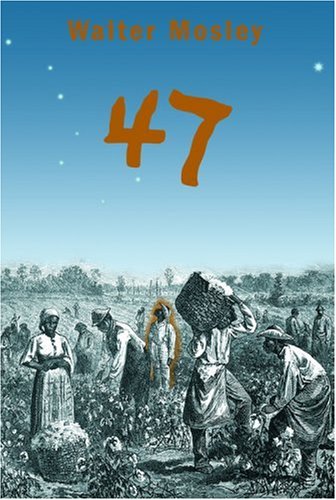 This thought-provoking, genre-bending account of one slave's emancipation, Mosley's ( ) first book for young adults, makes for harrowing reading. The narrator, called simply by his number, 47, recalls his life as an enslaved teen on a Georgia plantation in 1832, occasionally interjecting the wisdom he has gleaned in the intervening years. At the "most likely" age of 14 ("Slaves... didn't have ages like the white people did," he explains), 47 is sent to the fields to pick cotton. His life in the slave quarters begins with having his number literally branded on his shoulder in a brutal scene, which palpably captures the cruelty of the period. Mosley's novel is more than a work of historical fiction, however—47 starts off by explaining that these events "happened over a hundred and seventy years ago," and hints that something supernatural is coming. It arrives in the person of "Tall John from beyond Africa," who masquerades as a runaway from a neighboring farm, but who is, in fact, an extraterrestrial searching the galaxy for 47. Those familiar with African-American folklore will recognize him as a variant of High John the Conqueror, a spirit who ultimately sets the slaves free. "Neither master nor nigger be," Tall John repeatedly tells 47, who must unlearn a lifetime of subservience in order to grasp the nature of freedom and its relationship to responsibility. Equal parts history and tall tale, this engaging story related by an endearing narrator is so full of dramatic tension that few readers will realize they're learning something, too. Ages 12-up.