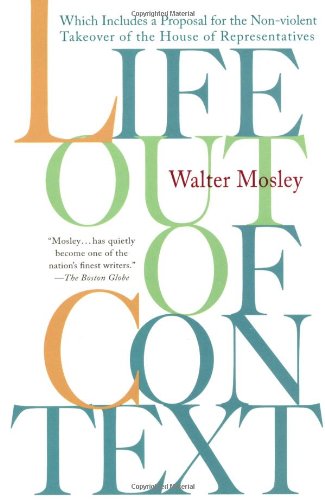 Life Out of Context

The isolation and ineffectuality of the American left is lamented in this brooding, somewhat unfocused cri de coeur. Writing primarily for an African-American audience, novelist Mosley (the Easy Rawlins mystery series) argues that today's political myopia and paralysis are caused by a lack of "context." Americans, he contends, dwell on their own problems while ignoring the global context of oppression and exploitation—in Iraq, Africa and elsewhere—in which they are complicit. They are in turn shut out of decision-making forums, whose agenda is set mainly by the narrow interests of the wealthy and privileged. The efforts of progressive groups, meanwhile, lack any unified context and rallying point, and are therefore fragmented and dispersed among a myriad of causes. These musings prompt a number of suggestions, some of which—like giant downtown video screens to project images of humanitarian crises abroad—the author almost immediately retracts. Mosley's most substantive proposal is to challenge the two-party duopoly with a black political party; unfortunately, however, he does not discuss ways to lower the formidable institutional barriers to third parties in the American electoral system. In the end, he falls back on platitudes about the need for citizens to get involved and speak truth to power. Fine sentiments, indeed, but they fall well short of a cogent guide to action.