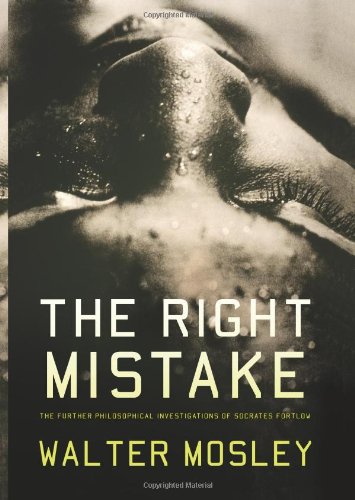 The Right Mistake: The Further Philosophical Investigations of Socrates Fortlow

A history of terrible violence including rape and murder followed by 27 years of incarceration in a prison with its own codified violence have helped shape Socrates Fortlow, previously featured in two short story collections, (1997) and (1999). The hardened ex-con living in South Central L.A. has been chiseled by his experiences into a hulking essence of wise humanity. An initial gathering of diverse characters (a Muslim, a Jew, a Buddhist, a gambler, a singer, a lawyer, two killers, etc.) brought together by Socrates becomes an agent of change. The weekly “Thinkers’ Meetings” grow despite internal dissension and attempts at suppression and subversion by authorities. The talks forge bonds, lead to actions, spread beyond L.A. and take on a life of their own. In the face of gangs, drugs, poverty and racism, Mosley poses the deceptively simple question—“What can I do?”—and provides a powerful and moving answer.