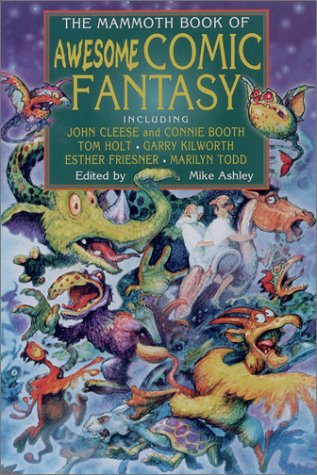 As prolific editor Ashley shows in this third comic fantasy anthology, a mix of reprints and original tales, humor comes in many varieties, but it's the most fragile of literary forms, often not traveling or aging well. Such a story as Stan Nicholls's "Polly Put the Mockers On" remains untranslatably British. Wizards, nearly all British, pop up drearily in far too many of the entries. In her heavy-handed, wizard-laden pastiche of Damon Runyon, "Broadway Barbarian," Cherith Baldry manages to convert gold to lead. More successful on the whole are the reprints, notably Porter Emerson Browne's "The Diplodocus" (1908), about a Luther Burbank type who combines animal instead of plant species with hilarious results, and Nelson Bond's "Nothing in the Rules" (1943), an ingratiating romp about horse racing and a rakish, scholarly centaur. Sheer silliness pays off in the opening tale, John Cleese and Connie Booth's "Happy Valley," later adapted for an episode of . More serious silliness underlies Avram Davidson's delightful Ruritanian pastiche, "Milord Sir Smiht, the English Wizard." In the shaggy dog category, with their punning twists, are James Bibby's "Pale Assassin" and Jack Sharkey's "The Blackbird." And Scott Edelman's all-dialogue "You'll Never Walk Alone" is the ultimate "magnetic personality" story. While only a dozen or so of the volume's 32 tales rank as truly "awesome," the laughs come often enough. Try it, you'll like it.