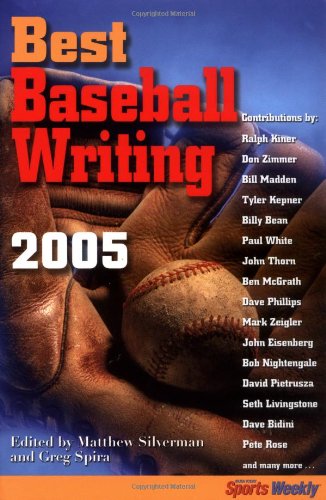 For a sport that lends itself so well to literature, it's surprising that this collection of baseball writings, which is slated to be an annual event, is the first of its kind. That's not to say that there hasn't been plenty written on the sport, however, and this anthology demonstrates the full range of fine baseball literature available. Silverman and Spira have done a yeoman's work scouring newspapers, magazines and books for the cream of the crop, drawing together both noted and little known writers on the subject. Dave Bidini, a ""Canadian rocker,"" delights with his account of his time spent following a third-tier Italian baseball team, whose players drink espresso in the dugout, snack on panini spread with grape jelly (""the Italian athlete's equivalent of an energy bar"") and play not for money or fame but ""for the joy of play."" Ben Osborne's firsthand take on the highly anticipated return of baseball to Brooklyn in the form of the minor league Cyclones possesses a similar homespun charm, as it places readers in the stands with Rudy Giuliani, Chuck Schumer and thousands of reminiscing baseball fans there to celebrate Opening Day. A few pieces, such as Tyler Kepner's New York Times article covering the Yankees' trip to Japan, seem present more to chart the year's biggest events than the year' best baseball writing. Thankfully, these more mundane works, the sort any fan comes across in the sports section, are kept to a minimum. As a nod to the most highly publicized baseball book of the year, the editors include an excerpt from Pete Rose's My Prison Without Bars. The anthology succeeds, however, on the shoulders of those works found in quieter corners, those places in which serious baseball fans, and fans of good sports writing in general, can sit comfortably and read for hours.
close
Details