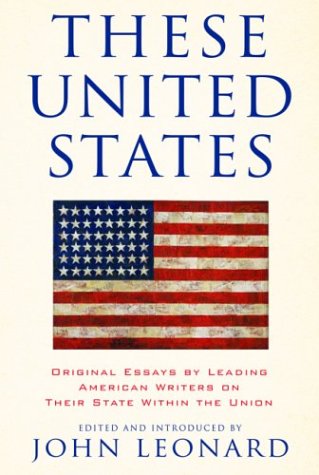 THESE UNITED STATES: Original Essays by Leading American Writers on the State of Their State Within the Union

Eighty-one years ago, the published a series of 49 articles on each of the then 48 states and Washington, D.C., that were later collected in two volumes. That book's contributors included notables such as W.E.B. Du Bois (Georgia), Sinclair Lewis (Minnesota) and Willa Cather (Nebraska). Now, Leonard, a noted reviewer, editor and writer ( , etc.), has edited an impressive new collection of 55 original essays for this new century. Leonard includes Puerto Rico, and California has two essays (North and South), New York three (New York City, Long Island and Upstate). An impressive host of writers, styles and structures are as diverse as the subjects. Michael Tomasky ponders West Virginia's sense of cultural insularity as a state teetering between North and South; Donald Hall mourns the sudden loss (from natural causes) of New Hampshire's emblem, the Old Man of the Mountain; and Walter Kirn details the severity of Montana's economic privation. The book is organized alphabetically by state, and reading from start to finish entails a series of interesting jumps, e.g., from Georgia to Hawaii or from Colorado to Connecticut. This choice is wise, for it allows each state, and each writer, to stand out. Because the project commenced in 2001, references and reactions to the September 11 attacks are myriad. One of the more poignant of these reflections comes in Frank Conroy's piece on Iowa. He writes, "Iowans may be saddened... but they are not afraid. Not even remotely."