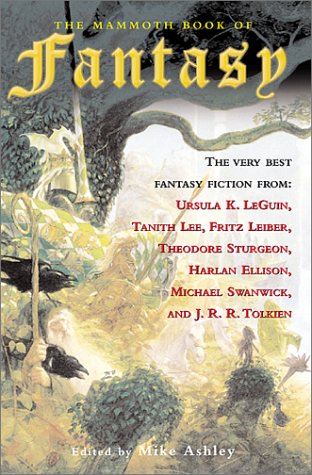 THE MAMMOTH BOOK OF FANTASY

Indomitable British editor Ashley has collected 22 classic fantasy tales (plus one original story) by authors ranging from Victorian George Macdonald to such modern giants as Ursula K. Le Guin and Harlan Ellison in an apparent effort to lure Harry Potter fans to the wider genre. The anthology opens with Theodore R. Cogswell's "The Wall Around the World" (1953), which charms apart from its affinities with the Potter books. Lord Dunsany and his school are represented by the Irish fantasist's own "The Hoard of the Gibbelins"; Lucius Shepard's witty rejoinder to the Dunsany tale, "The Man Who Painted the Dragon Griaule"; Darrell Schweitzer's ironic "King Yvorian's Wager"; and Jack Vance's wry "The Sorcerer Pharesm." The entries by pulp masters Robert E. Howard ("The Valley of the Worm") and Clark Ashton Smith ("The Last Heiroglyph") are well chosen, but A. Merritt would have been better represented by his "The Woman of the Woods" than by his barely breathing 1918 novelette, "The Moon Pool." The clever and disconcerting concept of Theodore Sturgeon's "Yesterday Was Monday" (1941) more than compensates for the tale's dated style. A new, very human story by Louise Cooper, "The Sunlight on the Water," features a ghost tiring of her still living but aging husband. Other contributors include Roger Zelazny, James P. Blaylock and Tanith Lee, though it would have been nice to see such less familiar if equally worthy names as Frank Owen, John Collier and Walter de la Mare. Still, like other titles in the Mammoth series, this offers high quality at a most affordable price.