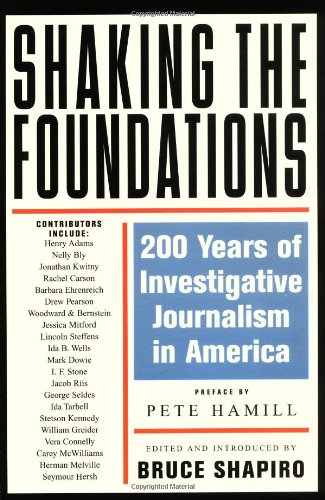 Arriving shortly after the 's fall from grace at the hands of a fraudulent staff reporter, this collection of America's best investigative reporting may redeem not only that paper but the entire profession of journalism. Yale journalism professor Shapiro explains he sought to fill a void in the textbook industry; he "wanted material to illustrate essential reporting and narrative techniques... that would give some sense of the historical evolution of investigative journalism." He offers short introductions for each selection, elucidating the pieces' historical significance and transforming what could be a dry primer into an enjoyable compilation for general readers or history buffs. It includes the obvious choices: the 's exposé of Boss Tweed and Tammany Hall corruption in the 1870s as well as its revelation of the Pentagon Papers a century later; the exposure of lynching by Ida B. Wells, a former slave turned advocate of blacks' and women's rights; and the work of legendary muckrakers from Lincoln Steffens to Woodward and Bernstein. But the book's definition of investigative reportage reaches farther than other collections of its kind (and, indeed, there aren't many), containing a sort of slave narrative in "History of the Amistad Captives," a factual novel by Herman Melville, and Ralph Nader's groundbreaking challenge to the auto industry. Wells begins her 1895 account as an appeal "to the sober sense of the American people" to refute the status quo, and it is essentially this spirit that motivates the volume's other journalists. It's been said that journalism is the first draft of history—if so, then this is a history of the writing of history.