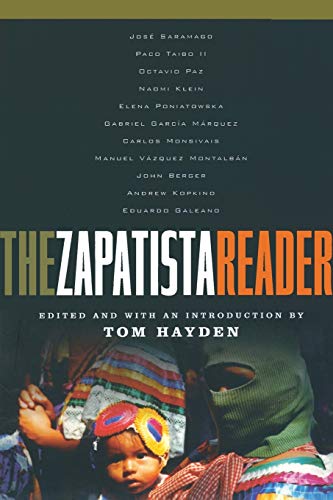 Collecting essays, interviews, articles and letters that center on a Latin American guerilla revolution and its hero, Subcomandante Marcos, this anthology is an excellent resource for anyone interested in the movement born in 1983 as the National Zapatista Liberation Army. As Hayden, a California state senator and the author of , writes in his introduction, largely because of Marcos, there is "a diary, a poetry, an intellectual account" of the struggles of southern Mexico's indigenous communities to preserve their lands and their rights. Hayden's thoughtful volume is divided into three sections: eyewitness accounts of the movement's most spectacular display (on Jan. 1, 1994, 3,000 Zapatistas took control of six large towns and hundreds of smaller ranches in response to the implementation of NAFTA); the poetic writings of Marcos; and a series of essays by political and intellectual leaders reflecting on the Zapatistas. Since the 1994 uprising, skirmishes between the Mexican government and the Zapatistas have continued—lives are lost and lands are stolen, returned and stolen again—but the U.S. media reports little of these affairs. This neglect has encouraged Latin American and European journalists and writers to step forward, their imaginations caught up with what many consider to be one of the last revolutions of and for the people. José Saramago, Gabriel García Márquez, Octavio Paz and Eduardo Galeano all weigh in on the insurgency and its mysterious and charismatic leader; it is these essays, along with Marcos's letters and speeches, that make this collection a worthy addition to the canon of Latin and South American literature as well as a valuable historical text.