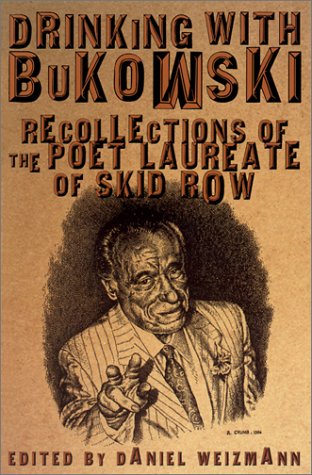 DRINKING WITH BUKOWSKI: Recollections of the Poet Laureate of Skid Row

"Alcohol is probably one of the greatest things to arrive upon the earth—alongside of me," Bukowski (1920–1994) once said in an interview. While not everyone would agree, few deny that Bukowski casts a long shadow, and the literary community is still processing the fact of his death. L.A. poet and journalist Weizmann has assembled a collection of reprints and never-before-published pieces in honor of "Buk," the postal worker–turned–"cult celeb" whose writing and personage hold unique appeal for artists and non-literati alike. The 35 different voices—including famous folks such as Sean Penn, Karen Finley and Raymond Carver—give a remarkably coherent, even, at times, redundant portrait of this abusive, alcoholic, egocentric, gifted and sometimes misunderstood literary bad boy. By turns amusing, tiresome, charming, repellant and moving, the collection seems an appropriate tribute to a writer who provokes similarly equivocal feelings. Bukowski might have appreciated, or at least respected, the frankness of many of the contributors. Included are poems by Bukowski's love interest (and mother of his only daughter) FrancEyE, Todd Moore and Raindog; Gerald Locklin's "How to Get Along with Charles Bukowski"; prose by drinking buddy Neeli Cherkovski and onetime girlfriend Linda King; and interviews by Penn and Jean-François Duval. Most contributions are thankfully brief and, like their subject, direct. And yet, one can't help wondering if the consistently sympathetic evocations of Bukowski as a thorny individual who suffered deeply from childhood rejection by classmates because of his bad skin, while perhaps providing closure for fans and intimates, might clash with his proclivity for vulgarity and disrespect