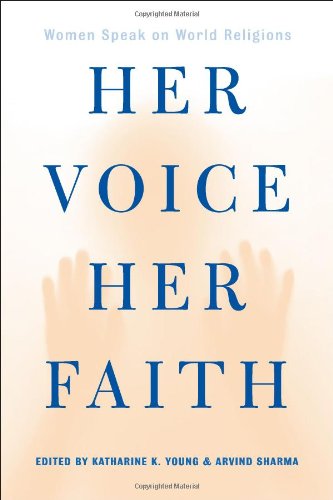 HER VOICE, HER FAITH: Women Speak on World Religions

This collection of essays is worthwhile in concept. Eight experts with solid scholarly credentials examine the roles played by women in world religions, adding a first-person perspective from their own religious experiences to their essays about women's historically underappreciated and underdocumented participation in religions. This fine idea is, however, unevenly executed, producing essays of mixed quality that suffer from either narrow focus on material from a tradition or underexplained references to a tradition's complex pantheon, teachings or history. Rita Gross's essay on women in Buddhism most successfully mixes discussion of canon, religious teachings, historical practice and contemporary issues. By contrast, Riffat Hassan's essay on women and Islam, with limited scholarly citation and argument about the meaning of pivotal but nonetheless highly selected Qur'anic passages, does not do justice to the vast history of participation by women in this major world religion. Wendy Griffin's piece on goddess spirituality is the most seriously flawed. Its unquantified assertions ("More covens formed"; "More and more women came") about the growth of a minority movement mostly in the past 30 years do not add up to proof of impact on, and reflection of, women's lived experience—96 footnotes notwithstanding. An essay on new religious movements—including modern goddess spirituality—or world indigenous religions would have offered a more capacious and scholarly framework for documenting women's religious practices, beliefs and leadership across the boundaries of time and culture.