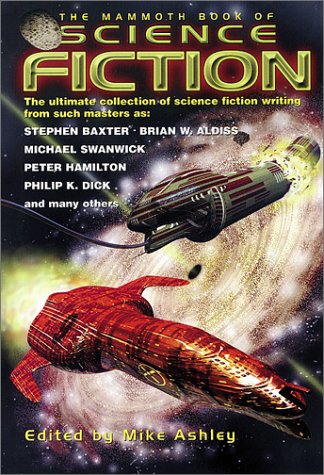 THE MAMMOTH BOOK OF SCIENCE FICTION

Fans who prefer their SF heavy on ideas will enjoy prolific British editor Ashley's latest anthology, comprising 22 tales, mostly reprints, which focus on the question, "what if?" Stories range in tone from deadly serious, as a colonist on an alien planet avenges the desecration of his wife's grave (Peter Hamilton's "Deathday"), to a romp featuring clone private eyes (John Morressy's "Except My Life3"). Several takes on time travel foreground its danger: Connie Willis's "Firewatch" follows a time traveler sent back to 1940 to snuff out fires at St. Paul's Cathedral during WWII; and in Damon Knight's "Anachron," brothers feud over a time-travel device that allows access to unlimited treasures. Several stories explore sentience: Eric Frank Russell, in "Into Your Tent I'll Creep," asks what would happen if dogs were the real masters of humanity. What if electricity were sentient—and hostile? Keith Roberts provides a chilling scenario in "High Eight." What if Io was an alien machine? Michael Swanwick presents an arresting view of the Jovian moon in the powerful "The Very Pulse of the Machine." The stories from the 1980s and 1990s are particularly strong; the ones from the 1950s haven't aged well but have intriguing ideas. The historical depth is sketchy, and two stories—by Stephen Baxter and Eric Brown—were commissioned just for this anthology. Despite these gaps and drawbacks, the juxtaposition of old and new sheds new light on some old classics—and vice versa.