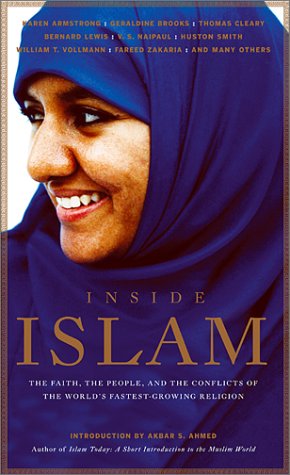 INSIDE ISLAM: The Faith, the People, and the Conflicts of the World's Fastest Growing Religion

This compilation of critical essays and book excerpts from 14 distinguished voices (including scholars, journalists and the 2001 Nobel Prize winner, V.S. Naipaul) offers a timely and valuable introduction to the multifaceted world of Islam. Most of the selections were written before the events of September 11, and many show a remarkable prescience regarding the "new" terrorist threat. In particular, William T. Vollmann's essay on Afghanistan contains so much insight about the motivations of the terrorist regimes there that readers will be astounded to learn that it first appeared in the two years ago. Editors Miller and Kenedi have arranged the selections into three sections. The first, "The Faith," addresses the Qur'an and the religious practices that are fundamental to all Muslims. "The People" showcases the role of Islam in different regions from a largely journalistic and literary perspective, while "The Conflicts" interprets contemporary developments from a historical standpoint, discussing events as long-distant as the Crusades or as recent as the failure of Nasser's Egypt to modernize along Western secular ideals. This intelligent arrangement juxtaposes the fundamentals of Islam against the context of its practice and development as a changing social force. It frames the complexities of the current global predicament so well that when readers consider the final essay (Fareed Zakaria's "Why Do They Hate Us?"), they'll be in a far better position to approach the question than when the article initially appeared in last October.