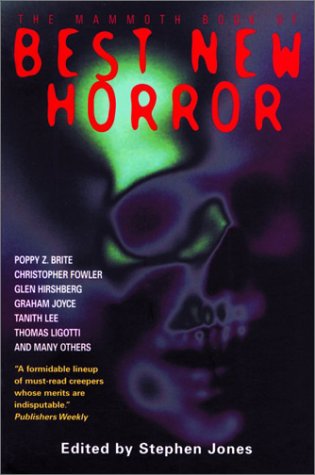 Fans of horror fiction will no doubt read special auguries in this dependable anthology series tallying its "lucky" 13th volume. Like all previous incarnations, though, the book distinguishes itself simply by offering a cross-section of what Jones, one of the genre's most enthusiastic cheerleaders, reckons the best short horror fiction of the previous year. More than before, the contents seem to fall into categories that are easily discerned if not explicitly advertised. Travel to alien lands full of mystery and menace is a theme shared by a several stories, notably Graham Joyce's "First, Catch Your Demon," a fever dream of erotic fantasy and creepy physical transformation for a visitor to the Greek isles, and Ramsey Campbell's "All for Sale," which extrapolates its stranger-in-a-strange-land premise into the ultimate traveler's nightmare. Horrors seem to grow just as easily from the everyday in Charles L. Grant's "Whose Ghosts Are These," in which the ennui of small-town life transmutes into sociopathy; Thomas Ligotti's "Our Temporary Supervisor," which finds a supernatural consciousness behind routines that ensnare the average office drone; and Donald Burleson's "Pump Jack," a dandy bit of dark folklore involving ubiquitous oil wells in the American southwest. A high number of selections—by Tanith Lee, Chico Kidd (two stories), Michael Chislett and Conrad Williams—reference well-known supernatural works and showcase the recent resurgence of interest in horror's classic tradition. Jones's comprehensive summary essay and eloquent reflections on horror fiction's importance in the wake of the international events in 2001 help to make this volume one of horror's best.