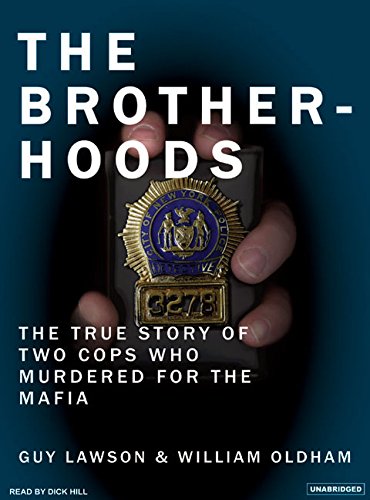 The Brotherhoods: The True Story of Two Cops Who Murdered for the Mafia

Hearing award-winning audio veteran Hill deadpan his way through a no-nonsense New York street accent through the cast of characters (Charlie "Flounderhead" Visconti is one of them), you might think you're listening to a Woody Allen routine or a takeoff. But this is serious stuff—a solid and exciting audio version of journalist Lawson's and top anticrime detective Oldham's book on the headline-making trial of Louis Eppolito and Stephen Caracappa, two retired cops who were convicted of assisting the Mafia during their long careers with the NYPD. They were charged with providing information to mobsters and even killing for cash. The trial became even more sensational when an honest judge threw the case out of court because the evidence hadn't been collected correctly. Fiction writers couldn't make this stuff believable, but Lawson and Oldham pull it off in style.