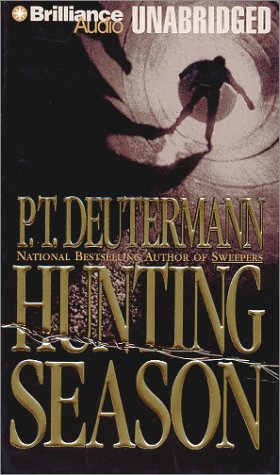 Deutermann's latest blast at the FBI/ CIA establishment, read with muscular intelligence by Hill, begins with an extremely frightening and tense scene, as three teenagers hiking through an abandoned military site in West Virginia find themselves literally in over their heads—the two boys caught in deadly steel traps as rising flood waters threaten to drown them, and the smart, resourceful girl unable to do anything to save them. The girl, Lynn Kriess, is the daughter of a former CIA "sweeper"—catcher of rogue agents—named Edwin Kriess, and both she and a deceptively baby-faced FBI agent Janet Carter are quickly brought to credible life by Hill. (Disappointingly, he has more trouble with Misty, a female arch villain, but that may be because she is less clearly conceived by the author than the other two women.) While Kriess tries to find out what happened to his daughter, Janet is set up by her FBI bosses to spy on his activities—causing an inevitable duel of loyalties. Despite Hill's best efforts, the story bogs down a bit in the middle hours, as several sets of apparently interchangeable feds fight for dominance. But things pick up again toward the end, which can even be described as happy—especially for a story as fraught with devilry and paranoia as this one.