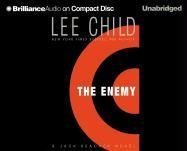 Child ( , etc.) brings back his intrepid hero, Jack Reacher, for another excellent mystery, which steps back in time to the eventful first few weeks of 1990. The Berlin Wall has just come crashing down, marking an end to the Cold War, and as a result, the U.S. Army is facing a massive restructuring of purpose and personnel. During this turbulent time, 29-year-old Reacher, an MP major stationed to a base in North Carolina, is called on to investigate the death of a two-star general found dead in a seedy motel. Veteran reader Wolf, who has given voice to Reacher in seven previous novels, slips easily into this character; his calm, thoughtful delivery fits perfectly with Reacher's contemplative first-person narration. Wolf uses his voice to draw listeners into Reacher's investigation, as the MP ponders each clue and follows a trail of cover-ups and murder to the highest echelons of the military. Although Wolf struggles a bit with his French accents, his narration complements one of the best novels in Child's series.