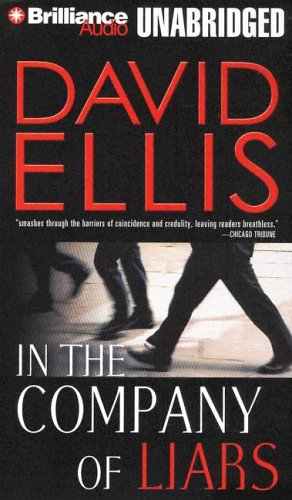 In the Company of Liars

Chicago lawyer Ellis's fourth thriller (after last year's ) begins with the reported death of bestselling author Allison Pagone—the main suspect in the fatal bludgeoning of her lover, a D.C. lobbyist—and continues backward to the night of the murder. Reverse chronology is a tricky literary device that may prove too demanding for the multi-tasking listener, especially when it comes to keeping track of an elaborate plot involving not only homicide but terrorism, corruption and wheeling and dealing by several law enforcement agencies (and, as the title suggests, lots of lying). But those willing to give this well-produced audio their full attention will be rewarded by an ingeniously plotted and satisfying whodunit, stylishly rendered by Hill and his wife, Breck. Both narrators play well off of each other to give voice to this twisting tale, but the latter is particularly effective in her portrayals of the hapless Pagone, trapped in a seeminglyuntenable situation, and FBI agent Jane McCoy, who is suffering the frustration and guilt of having done the trapping.