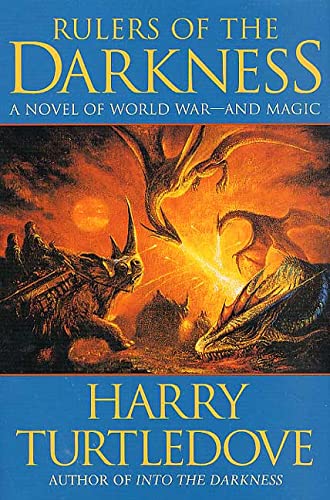 RULERS OF THE DARKNESS

The author of the Worldwar and Great War series displays his virtuoso command of the details of WWII in this fourth book (after 2001's ) about a conflict between mythical feudal kingdoms using magic instead of science as the basis for technology. Aficionados will enjoy picking out the parallels—the Japan-analog Gyonghos Empire, for example, fights "the grinning dwarves of Kuusamo" (i.e., the United States). On the equivalent of the Eastern front, the German-based Algarvian Empire recovers from its losses in the frozen urban hell of Sulingen and prepares for its usual summer advance against the forces of King Swemmel of Unkerlant, leading to a replay of the battle of Kursk. Turtledove's great strength has always been the depiction of ordinary characters who have to live with the consequences of their superiors' decisions—an Algarvian policeman in Forthweg objects to rounding up Kaunians, while a group of theoretical magicians must work on a thaumaturgical Manhattan Project. Alternate history derives half of its fun and all of its significance from the understanding it fosters of the ur-conflict, but when the Algarvians begin mass killings of the Kaunian minority in Forthweg to incorporate their life energies into potent sorceries against their opponents, only to be matched by Swemmel's willingness to slaughter his own peasantry for a similar magical advantage, one doesn't feel that our understanding of the Holocaust is advanced. Turtledove may offer few insights into WWII, but he sure knows how to use the facts to entertain.