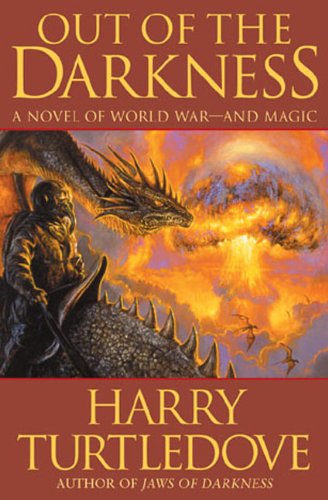 OUT OF THE DARKNESS

Turtledove concludes his six-volume magical fantasy alternative history of WWII ( , etc.) with this hefty multifaceted account of the price of winning and the cost of losing. Leaping between vignette-sized glimpses told through each of 16 "viewpoint characters" from different races and kingdoms, this final installment of the Derlavaian world war begins with climactic battles on several fronts, examines the bitter fruit of the Algarvians' genocidal policies against the Kaunians, traces the development and first use of uncanny new magical weapons of mass destruction and sows the seeds for a new conflict between Unkerlant and its former allies. The author's ability to convey complex abstract issues through strong characterizations sweeps this complicated narrative along with a minimum of stereotypes, and he succeeds especially well at portraying inner conflicts caused by hate and pride. As the war grinds to a halt and various story lines start to converge, individual characters' fates gain urgency. Can Vanai, a Kaunian woman masquerading as a Forthwegian, trust her neighbors and safely reveal herself and her child? Can Unkerlanter Marshal Rathar trust his paranoid kin Swemmel not to strike out at the loyal Rathar as a possible rival? By personalizing the frightful tragedies of war, Turtledove makes the big bang of the war's ultimate weapon far less affecting than the whimpers of its many victims. (