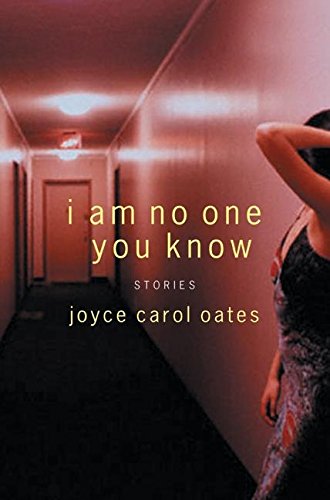 I AM NO ONE YOU KNOW

Never one to shy away from grim or sensational themes, Oates writes about murder, rape, arson and terrorism in her latest collection of short fiction. In these 19 stories, she evokes the underbellies of small towns and the bizarre and obsessive desires of their inhabitants. In "Upholstery," a teenager finds herself helplessly attracted to a lecherous older man. A 14-year-old in "The Girl with the Blackened Eye" is brutally abducted but afraid to break her kidnapper's trust by escaping. In Oates's precise psychological renderings, victims are as complex as villains and almost always more interesting. The lure of the criminal is seductive, impossible to resist. Two stories, "In Hiding" and "The Instructor," feature middle-class female intellectuals inexplicably drawn to convicts. The prototypical victim, Marilyn Monroe—also the subject of Oates's acclaimed 2001 novel —appears in disguise in "Three Girls," when two young coeds encounter her in the Strand bookstore and agree to help her remain anonymous. The collection closes with a story about September 11 that in anyone but Oates's hands would fall flat. But "The Mutants," in which a young woman trapped in her downtown apartment building refuses to be paralyzed by fear, is beautifully, uncannily affecting. "She was hollow-eyed and gaunt yet wakeful, no longer the dreamy-eyed blond. A mutant being, primed to survive." Indeed, even the strangest events in this sure-footed collection are painfully familiar.