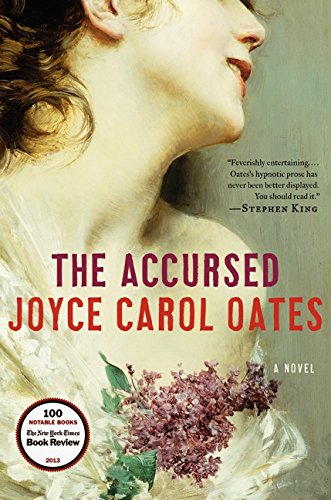 Oates has published more than enough books to take risks, and her newest is exactly that: first drafted in the early 1980s, then set aside, the novel is, in addition to being a thrilling tale in the best gothic tradition, a lesson in master craftsmanship. Distilled, the plot is about a 14-month curse manifesting in Princeton, N.J., from 1905 to 1906, affecting the town's elite, including the prominent Slades of Crosswicks and Woodrow Wilson, the president of Princeton University. After Annabel Slade is strangely drawn out of the church during her wedding, an escalating series of violence and madness based in secrets and hypocrisy is unleashed in the community. This story has vampires, demons, angels, murder, lynching, beatings, rape, sex, parallel worlds,, Antarctic voyages, socialism, sexism, racism, paranoia, gossip, spiritualism, and escalating insanity. Oates uses the Homeric ring structure, and her mysterious narrator takes frequent tangents, offering backstories, side stories, footnotes, and a hilarious, subtly satirical chapter on the different-colored diaries and lacquered boxes providing his "sources." The story sprawls, reaches, demands, tears, and shrieks in homage to the traditional gothic, yet with fresh, surprising twists and turns. Oates weaves historical figures throughout, grounding the narrative in a quasi-familiar reality without losing a "through the looking-glass" surrealism. The cause of the curse is not much of a surprise, but the way it's broken is both traditionally mythic and satisfying. Oates has given us a brilliantly crafted work that refreshes the overworked tradition. The author's rage at social injustices and the horrific "cures" for invalids boil beneath the surface; she's skilled enough to let them fuel the fury without erupting into fire. Take on this 700-page behemoth with an open mind, and hang on for the ride. Agent: Warren Frazier, John Hawkins and Assoc. (Mar.)
close
Details