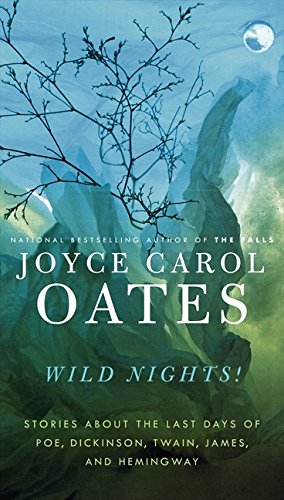 In this intriguing collection, Oates writes fictional death scenes for five canonical American writers, adopting elements of their signature styles with mixed results. The Poe story, written as a diary in the months after Poe’s death, doesn’t quite dole out its revelations with Poe-like abandon. Emily Dickinson’s end is set not in 19th-century New England but in the 21st-century New Jersey suburbs, where an Emily Dickinson “replicant,” complete with enigmatical utterances, is purchased by a tax attorney and his wife to liven up the house, but ends up highlighting the banality of their existences. Samuel Clemens’s death is set, menacingly, against his penchant for befriending adolescent girls, a habit deplored by his spinster daughter, Clara. The prize story, however, is “Papa at Ketchum 1961,” where Oates inhabits Hemingway’s terse style to show the great man going down in a paroxysm of psychoses. This brutal turning of Hemingway against himself sparks a torrent of rage like that of early Oates novels such as . It marks an explosive ending to Oates’s peculiar fantasy game, one that begs to be treated at length.