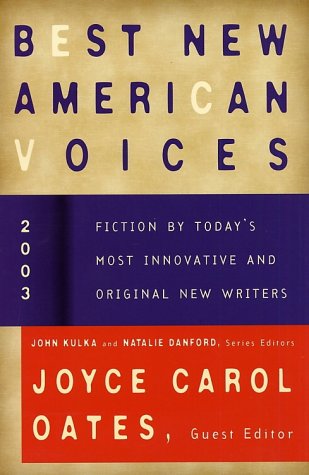 Guest editor Oates attempts a "swerve of engagement" in these 15 mostly staid, well-behaved stories culled from American writing programs and workshops. Sober realism rather than exhilarating experimentation characterizes most of the youngish voices—and death is an obsessive presence. "Good," by Cheryl Strayed, provides the titillating opening tale: a young, emotionally disconsolate woman whose mother is dying of cancer has a briefly comforting affair with an older man whose wife is dying in the same hospital. Esi Edugyan's "The Woman Who Tasted of Rose Oil" treats the death of a loved one with surreal grace: a middle-aged woman returns after her death to the home she shared with her husband of 34 years. Hal Horton's "The Year Draws in the Day" delineates the awful, numbing realization of mortality for a young gay man who tests HIV-positive while working in a hospice for AIDS patients. A few of the stories feel like pieces of longer work: "Peace," a riveting narrative by Dylan Tai Nguyen, relates a shattering incident in "re-education" for a Vietnamese boy who is forced by his teachers and fellow students to renounce his "subversive" father, a poet and journalist languishing in prison. While John Murray's "A Few Short Notes on Tropical Butterflies," tracing the neurotic inner conflicts of a surgeon couple, stands out among the selections for its ambitious range, Laura Hawley's "The Good Life" offers welcome comic relief in its depiction of an upscale e-business couple convinced that their new, state-of-the-art home is haunted. Overall, there are good reasons to expect promising futures from many of these writers.