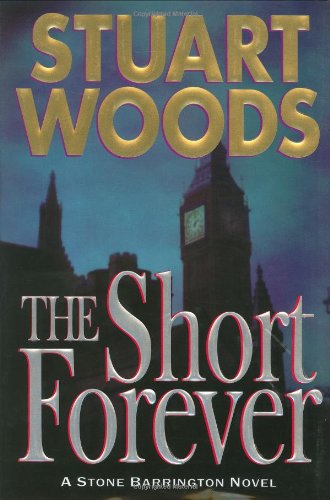 In recent Woods bestsellers like , N.Y.P.D. detective-turned-PI Stone Barrington has gone upscale in lifestyle, international in expertise. This time, mogul John Bartholomew hires Stone to fly to London and persuade his niece, Erica, to leave her cocaine-smuggling boyfriend, Lance Cabot, and to make sure Lance winds up in jail. Dapper Stone charms Erica, who offers to set him up with her sister, Monica, and then introduces him to Lance. With help from two British investigators, Stone learns John Bartholomew is not who he seems: not only is he not Erica's uncle, he's really CIA biggie Stan Hedger. Confronted, Stan owns up, revealing that Lance is an ex-CIA agent who blew ops, ran with cash and nearly killed him. Meanwhile, Monica asks Stone to a country weekend with Lance and Erica at what turns out to be the manse of his old flame, Sarah Buckminster, who previously dodged a New York bombing and is now engaged to a megatycoon. The fog thickens when Stone's N.Y.P.D. pal Dino Bacchetti flies over to smooth out the beating death of one of Stone's investigators and Scotland Yard brings in MI6, who suspect Lance is after a top-secret military device for a Mideast client. Woods may have left behind the police action of , but he churns up plenty of conflict and twisted plotting in this speedy tale. Several bombshell revelations and multiple resolutions combine with the cinematic plot for a perfect flight or beach read.