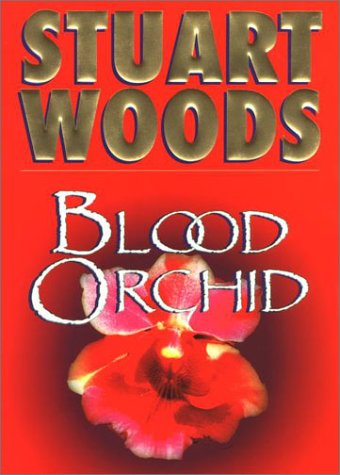 In Woods's 24th novel—his third in the Holly Barker series (after )—the prolific bestselling novelist revisits savvy, sexy ex-MP officer (and her dog, Daisy), now police chief of the small Florida east coast town of Orchid Beach. As the fast-paced but fluffy and rather predictable thriller begins, two out of three Miami bidders for a glitzy, gated residential complex with golf course are shot and killed. The third bidder, orchid fancier Ed Shine, a former New York real estate mogul and new resident of Orchid Beach, narrowly escapes the same fate. Shine renames his newly acquired property Blood Orchid, after an exotic hybrid blossom he has developed—a name that seems gruesomely prophetic when it turns out that the Miami mob may be involved with the property. Meanwhile, Barker, investigating the case and trying to discover who is bugging her beach house, spots the intruder's van from the plane of her flying instructor, Ginny (who is also her dad Ham's new bedmate). The two women make an emergency landing on the beach and scare the perp away, but his body is soon found floating in the Indian River. The trail leads to a shifty Cuban locksmith in Fort Lauderdale and the late intruder's fianceé. Enter a Miami restaurateur with mob ties, and corpses pile up as the plot thickens. Woods writes strong action scenes, but his usual flair for tight, creative plotting is sadly missed here.