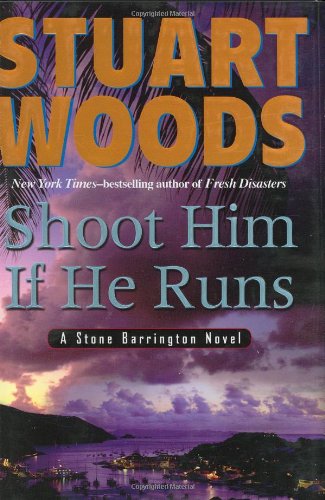 Shoot Him if He Runs

Stone Barrington and Holly Barker, Woods's longtime investigative and romantic duo, search for a rogue CIA agent on a beautiful tropical island in this low-voltage thriller. At the request of U.S. President Will Lee, Barrington and Barker travel to the Caribbean island of St. Marks to track down Teddy Fay, an agent-turned-assassin who has been on the loose for years. They find a mix of luxurious beach clubs, corrupt but genial politicians and a shady expatriate community that enjoys the local government's don't-ask-don't-tell approach to foreigners. What they don't find is Fay, a master of disguise and escape. Woods ( ) brings in his usual cast, including Barrington's sidekick Dino Bacchetti and CIA boss Lance Cabot, and spends as much time on fine dining and vacation fun in the sun as he does on the actual mission. The plot smartly picks up momentum toward the end, and a handful of character developments will keep fans eager for the next installment.