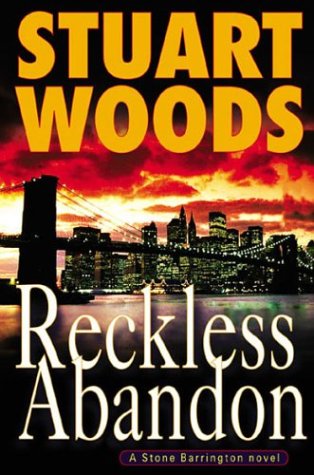 It's double the pleasure and double the fun as Woods brings series character Holly Barker, chief of the Orchid Beach, Fla., police department (of , etc.), onstage to co-star with PI Stone Barrington (of , etc.) in his latest adventure. Holly's come to New York hot on the trail of Trini Rodriguez, a bad guy she thought she'd stabbed to death in an earlier adventure. He's currently wanted for (among other things) blowing up a dozen people by hiding bombs in the caskets of two of his earlier victims and detonating them at the funeral. But finding him won't be so simple: he's been placed in the FBI Witness Protection Program and is working with the Feds and the CIA to catch an Arab terrorist group trying to employ the Mafia in a money-laundering scheme. Shortly after Holly takes up residence in Stone's guest room, the two of them are hip deep in the dangerous case—and likewise each other. They go at it so often it's hard to say what's going to kill Stone first: the Mafia, Arab terrorists or the athletic, all-night sex. Cross-pollinating all these characters from various books makes for some heavy-handed background exposition at times, but readers with no previous experience will still enjoy this amusing, full-throttle sex and crime romp. Stone's ex-partner and best pal, Dino Bachetti, head of the detective squad at the 19th precinct, sums up Stone's appeal, and that of the entire series, when he says of his friend: "Wherever you go, people drop dead, and women take off their underwear." That's it in a nutshell.