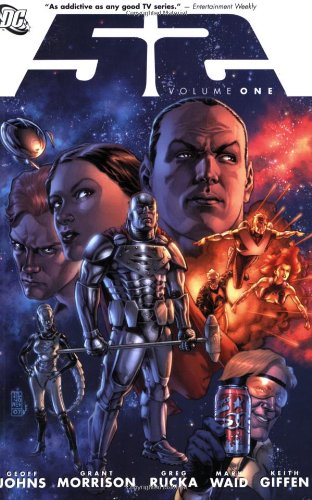 hen this first of four volumes was serialized, its selling point was that it was a weekly, soap-operatic series happening in “real time,” a sort of with superheroes, written by four major comics names. As a single book, it's a compelling mess: a breakneck but occasionally jolting tour of a fictional world whose balance of power is rapidly shifting, and it's packed with Easter eggs for longtime comics readers. The cast of hundreds includes time travelers, space travelers, a down-on-her-luck ex-cop recruited by a faceless hero to replace him, a Chinese government-sponsored superhero team, and mad scientists mysteriously vanishing by the score; there's a grand, -like conspiracy to which this volume offers plenty of clues but no solutions. Keith Giffen's layouts flow smoothly and give the book a measure of consistency; they're fleshed out by an assortment of cartoonists, mostly in solid examples of the generic superhero style of 2006. The writing team's knack for character comedy and crisp dialogue keeps the tone lively, but there are a few too many plot threads to juggle—the overall effect is of a handful of entertaining series with their pages shuffled together.