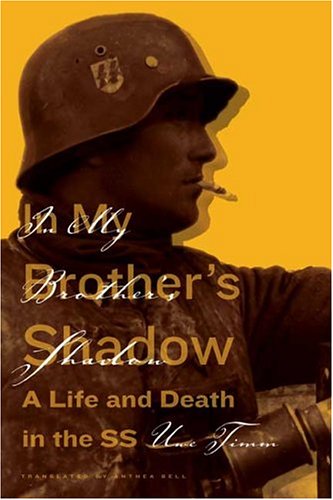 IN MY BROTHER'S SHADOW: A Life and Death in the SS

A memoir not of a brother but of his absence from the author's life and family, Timm's book revolves around memory—of how traces of his brother, an SS corporal killed in Russia in 1943, are tied up with aspects of WWII that still remain unspeakable for many Germans. Timm was two when his brother Karl-Heinz enlisted, at age 18. Using diary entries from a book Karl-Heinz kept at the front, family recollections and his own experience growing up without his brother, Timm works through, beautifully, his sense of an unknowable figure who, 60 years later, continues to loom large in his consciousness. At the same time, a good deal of the book goes toward unpacking the ways in which national identity informs personal identity; Timm digs into what it meant then (and means now) to have had a brother, or son, in the SS. Timm's novel was set during WWII, and this book is informed by a deep understanding of its horrors, anxieties and legacies. The translation is lyrical if occasionally awkward ("In the coffee break I went to the lavatory"); the whole compellingly scales a nation's failure down to the level of a nuclear family.