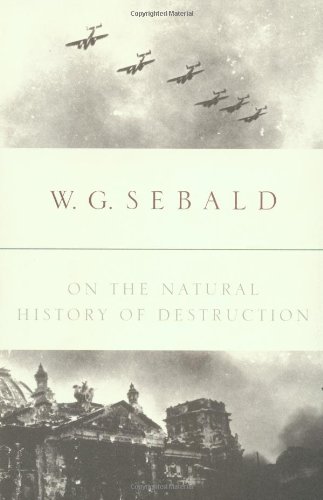 ON THE NATURAL HISTORY OF DESTRUCTION

Shortly before his untimely death last year, Sebald had published to great acclaim , the NBCC Prize–winning fourth of his novel-memoirs that appeared in rapid succession. Now comes this slim collection of four essays addressing the same themes that preoccupied Sebald in and his other major works—memory and survival in an era marked by so much wanton cruelty. The four essays gathered here find Sebald turning his luminous intelligence and rich, sometimes caustic prose on major figures of postwar German literature. Sebald can be a devastating critic: he dislikes melodrama and falsehood, is inspired by crisp, serious prose and veracity. In essays on Alfred Andersch, Jean Améry and Peter Weiss, Sebald suggests that great writing is underpinned by moral fortitude. In "Air War and Literature," Sebald criticizes the silence of postwar German literature on the starvation, mutilations and killings caused by Allied bombings. The essay provoked a major controversy when it appeared in Germany in 1999. Some commentators were dismayed that Sebald chose to revisit those difficult times and to attack, with his full ironic and sardonic powers, a number of revered figures in German literature. Sebald was dismayed that his comments provoked an outpouring of support from those who could talk only about German suffering and Jewish conspiracies. But only at the very end, almost as an afterthought, does Sebald place this suffering in historical context, as the consequence of German policies of total war and the Holocaust. "Air War and Literature" is an important but flawed effort by a writer who always demanded unflinching engagement with the past. B&w photos.