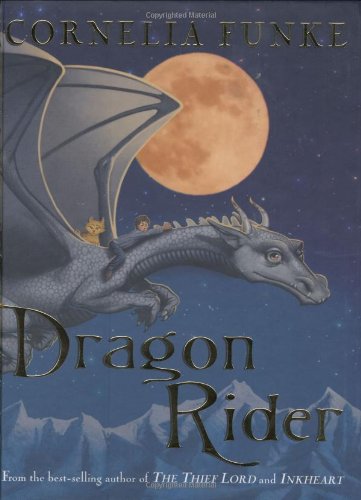 This fantasy that established Funke's ( ) reputation as a gifted storyteller in her native Germany (available for the first time in the U.S.), is sure to appeal to her many American fans. When humans encroach upon his home valley, Firedrake, a young silver dragon, sets off to find the Rim of Heaven, a legendary haven in the mountains. But evil Nettlebrand, a human-made hunter of silver dragons, is spying on him, hoping Firedrake will lead him to even more delicious treats. The creature, referred to as the Golden One, resembles a huge dragon, but he is covered in cold, hard gold scales and cannot fly; however, he can magically appear in any body of water. During his journey, Firedrake is joined by a feisty brownie, a homunculus (who initially spied for Nettlebrand) and Ben, an orphan who may be the dragon rider foretold in an ancient prophecy. Readers will delight in the creatures that turn up in this extended quest. The elves, dwarves and a thousand-eyed djinni (a kindly professor of archaeology and his friends also aid the travelers in piecing together clues) help contribute to a rich lore (all enchanted creatures have red eyes, for example, and dragon-fire will reveal their true natures). While readers may have trouble keeping track of all the plot's strands as they soar through this story, they will no doubt find themselves drawn in by the lively characters and their often hilarious banter, as well as the nonstop obstacles they encounter before the inevitable face-off with Nettlebrand. Ages 8-12.