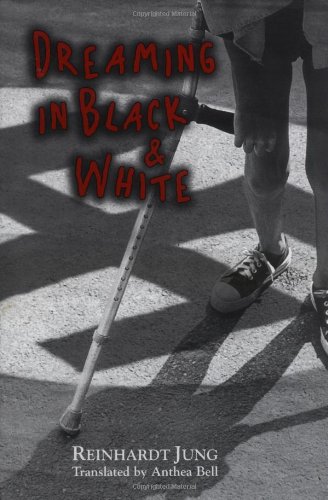 Set in the late author's native Germany, this Holocaust novella draws parallels between Nazi mass murders of the disabled and various possibilities associated with genetic engineering. The narrator, disturbed by his classroom studies of the Nazi regime, visits "" in his dreams (in black and white) and plays out a harrowing double life. Both "then" and in his waking life, the boy suffers from an unnamed genetic condition; "then," for example, he can't walk without a crutch and cannot speak clearly. Jung highlights the Nazi plan for "elimination of lives not worth living" and shows how hatred for the weak was bred. In one scene, a Nazi math teacher watches the boy flail in front of the classroom after his crutch falls; the teacher also assigns a word problem (from an actual textbook) to figure how much "mentally ill patients, epileptics, cripples, and so forth" cost the Third Reich. Jung is less successful when his narrator dramatizes the consequences of genetic testing, making leaps that are not entirely convincing: "Genetic testing won't let anyone but perfect human beings through.... I'd probably have been killed. These days I ought not to exist at all." Readers may be more interested in the boy's responses to his parents' attitudes. In both eras, the fathers are ashamed; the narrator's mother, however, is ashamed "because of the horrible way people sympathize with her." Such touches add emotional depth to the schematic approach here. Ages 10-up.