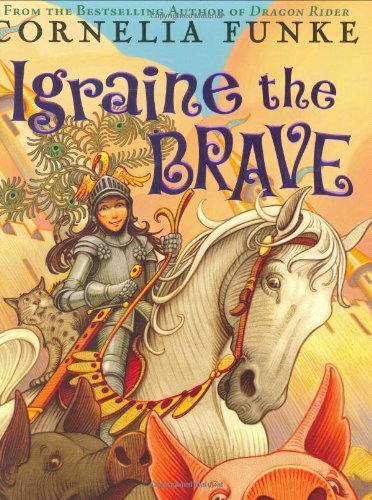 Igraine's parents are magicians who own the coveted Singing Books of Magic. Brother Albert has joined the family business, but Igraine finds magic incredibly boring—she pines for the excitement of knighthood. Then, on her 12th birthday, the vast castle next door is taken over by Osmund the Greedy, who wants the books for himself. At the same moment, Igraine's parents inadvertently turn themselves into swine, and their daughter happily volunteers for a quest to retrieve the red-headed giant's hairs they need to become human again. Funke's inventive re-imagining of the knight-in-shining-armor story benefits from its playful details—rainbow-colored smoke wafting out of the spell room, gargoyles who breathe fire from the turrets, stone lions that roar at strangers. Equally enjoyable are the family dynamics: though brother and sister begin as typical antagonists, they work together when their home is imperiled. Igraine's parents don't understand her aversion to magic, but respect her desire to forge her own path. Along the Funke continuum, which travels from silly picture books to the dark, ambitious fantasy of , this falls closest to , aimed squarely at elementary school readers. The author, whose career began in illustration, provides her own line drawings, witty images of the singing books (they have faces, hands and feet), and atmospheric spreads with inset text. While children will want to see the pictures up close, an abundance of action and humor make this satisfying story work as a read-aloud too. Ages 8-12.