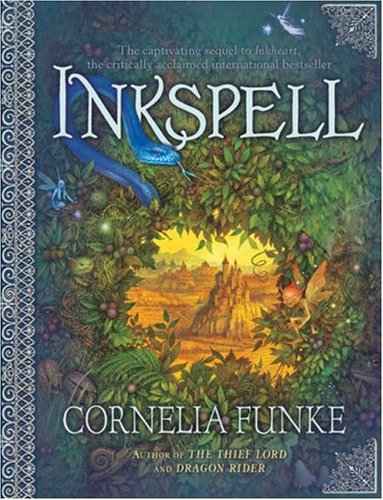 In this spellbinding follow-up to , Funke expertly mixes joy, pain, suspense and magic. In the opening chapter, Dustfinger returns to , the fantastic novel (within Funke's novel of the same name) from which he was sprung, and his "devoted" apprentice, Farid, asks Meggie to use her magical reading powers to send him into the story. Meggie, lured by the "place of marvels and adventures," goes with him. Her parents soon follow. The omniscient narrator allows readers to jump from the "real" world to Inkworld, where a war is brewing between Ombra Castle and the evil Adderhead's Castle of Night. Worse, Meggie's father, Mo (aka Silvertongue), is mistaken for a Robin Hood–type figure known as the Bluejay and is to be executed. Readers will race along with Meggie and other favorites as the characters try to create a "happy ending." Funke again cleverly plays with the power of words: Fenoglio, the author of , now lives in the world he created and continues to write new story lines—which play out in often unintended ways (e.g. he bases the Bluejay character on Meggie's father, putting Mo in danger). This is a thick and dark book (the Magpie shoots Mo, nearly killing him, and Basta appears for a final showdown), as well as sophisticated—especially the romance blossoming between Farid and Meggie, and Dustfinger's complicated relationship with Meggie's mother. There is much left to explore; readers will eagerly await the last in the planned trilogy. Ages 8-up.