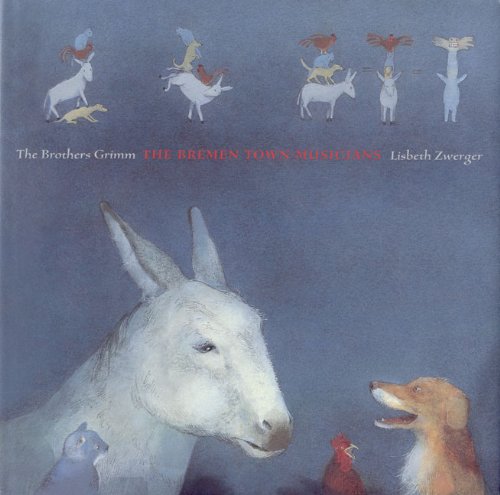 The inimitable Zwerger ( ) and experienced translator Bell transform what in other hands has come off as a silly story into a captivating tale about the unwitting triumph of four aged animals who join together to create a band, foil a gang of robbers, and end up finding themselves a home. Zwerger's illustrations convey both poignancy and sly humor. A full-page, skillful portrait introduces each animal character, while at the top, spot art depicts their plights. The weariness of each elderly creature is plaintive, and Zwerger makes clear visually how the robbers might mistake the animals sitting atop each other for a monster. However, at the most dramatic moment of the story, when one of the robbers returns to the house to confront the sleepy animals inside, Zwerger leaves the details to readers' imaginations, using only shadowy gray figures to portray the literal action that occurs. Unlike Ilse Plume's sunny interpretation, this new version of the Grimm story focuses on how the four old creatures, despite their Quixote-like quest to become musicians, end up finding contentment anyway. Bell's translation adheres closely and gracefully to the original, and the theme of what might happen to those who outlive their usefulness ends on an enchanting, happy note. Ages 4-up.