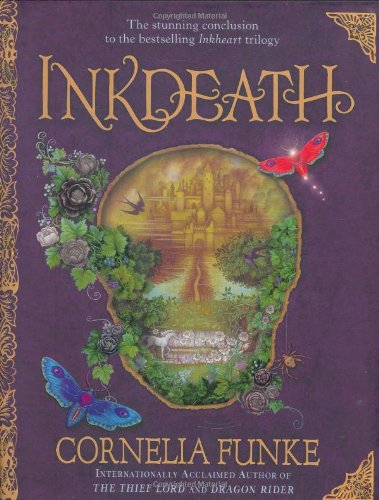 This concluding volume in Funke's bestselling trilogy picks up where left off, but sputters for a hundred pages filling in backstory. (Even then, an addendum is needed to identify a cast of 114 characters.) The Inkworld, full of dark magic, is under siege; the savagery of the Adderhead and his minions now extends to taking all the peasants' children until somebody delivers, as ransom, the Bluejay, a Robin Hood–style character whose identity has been assumed by Mo, Meggie's father (it was Mo who started all the trouble by reading several villains right out of the book-within-a-book, don't even consider reading this series out of order). The author, Fenoglio, now living in Inkworld himself, has turned to drink; the odious Orpheus, when he's not under a maid's skirt, rewrites Fenoglio's work (editors!) to benefit himself. The interesting metafictional questions—can we alter destiny? shape our own fate?—are overwhelmed by the breakneck action, yet the villains aren't fully realized. More disappointingly, the formerly feisty Meggie, barely into her teens, has little to do but choose between two suitors. Funke seems to have forgotten her original installment was published for children. Ages 9–up.