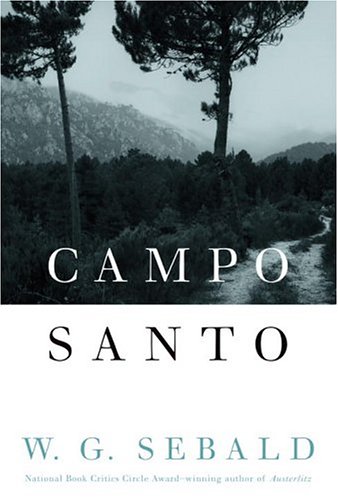 This brief volume is the latest and reportedly last collection of essays by German novelist and critic Sebald, who has seemed more prolific since his death in 2001 than in life. Despite the masterful translation, these essays fail to cohere, though they contain elements common to most of Sebald's work: an integration of art, politics and memory, framed by the writer's own curmudgeonly presence. The essays, however, feel unfinished, lacking polish and structural integrity. The collection is split into two parts, "Prose" and "Essays," with the first—a series of considerations of the landscape, history and social milieu of the island of Corsica—by far the more successful. The second, longer section contains an assortment of literary critical pieces, some detailed, such as a long essay about novelists writing about the destruction of German cities during WWII; others discursive, such as an apparently unfinished review of a book about Kafka's relationship with film that wanders from films Sebald himself viewed to films Kafka may or may not have seen. Although Sebald was a beautiful and intelligent writer, it's hard to see how these essays will appeal to anyone outside of scholars and already committed Sebald fans eager to read every word he ever set to paper.